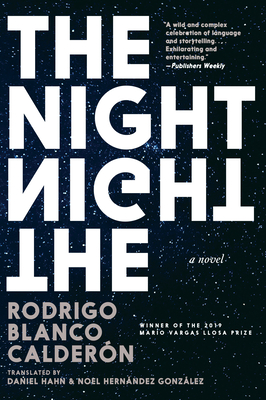 For readers who love Bolaño, a new voice of Latin American fiction, winner of the Mario Vargas Llosa Prize.

Recurring blackouts envelop Caracas in an inescapable darkness that makes nightmares come true. Real and fictional characters, most of them are writers, exchange the role of narrator in this polyphonic novel. They recount contradictory versions of the plot, a series of femicides that began with the energy crisis. The central narrator is a psychiatrist who manipulates the accounts of his friend, an author writing a book titled The Night; and his patient, an advertising executive obsessed with understanding the world through word puzzles. The author shifts between crime fiction and metafiction, cautioning readers that the events retold are both true and manipulated. This is a political novel about the financial crisis and socio-political division in Venezuela from 2008 to 2010. The title of the book, originally also in English, is a gesture towards Chavism's failure to resist US influence. Yet, the form is unapologetically literary, a reflection on the depiction and distortion of reality through storytelling. Blanco Calderón said about the potential of language, "I am convinced that all the evil in the world begins in them: in words."

Rodrigo Blanco Calderón is a writer and editor. He has received various awards for his stories both inside and outside Venezuela. In 2007 he was invited to join the Bogotá39 group, which brings together the best Latin American narrators under thirty-nine years old. In 2013 he was a guest writer on the International Writing Program at the University of Iowa. In 2014, his story "Emuntorios" was included in Thirteen Crime Stories from Latin America, volume number 46 of the prestigious magazine McSweeney's. With his first novel, The Night, he won the 2016 Paris Rive Gauche Prize, the Critics Award in Venezuela and the 2019 Mario Vargas Llosa Biennial Prize. Daniel Hahn is a writer, editor, and translator with sixty-something books to his name. He has won the Independent Foreign Fiction Prize, the International Dublin Literary Award, and the Blue Peter Book Award and been shortlisted for the Man Booker International Prize, among many others. He lives in London, England. Noel Hernández González is a writer and translator. Originally from Spain, he lives in Norwich, England.

"This novel is messy, exhilarating and hugely enjoyable. It is to the credit of Noel Hénandéz Gonzalez and Daniel Hahn that they engage so exuberantly with the technical and creative challenge of conveying such a linguistically imaginative novel into English."
—Rónán Hession, The Irish Times

“The Night is about palindromes and murderers, anagrams and social chaos, how words work and countries break down. A daring and smart novelistic debut.”
—Juan Gabriel Vásquez, author of The Sound of Things Falling

“Jean Genet argued that it was impossible to commit a truly criminal act in a criminal society. He was thinking of Vichy France, but much the same is true in Rodrigo Blanco Calderón's subtle, intricate, very literary thriller set in the Venezuela of today. A page-turner for intelligent readers.”
—Alberto Manguel, author of A History of Reading

"Fiction, reality and popular culture knit a web of parallels and echoes, reminiscent of the work of Agustín Fernández Mallo, with nods to Roberto Bolaño’s marginal writers —briskly deromanticized. The winner of the Mario Vargas Llosa Prize in 2019, The Night, which now appears in translation by Daniel Hahn and Noel Hernández González, is unabashed literature about literature and, most originally, its building blocks in language."
—Lorna Scott Fox, TLS Times Literary Supplement

"Venezuelan writer Blanco Calderón weaves a labyrinthine study of language, writers, and obsession against a backdrop of rampant femicides and the energy and political crises in contemporary Caracas. Three characters alternate the narration. There’s Matías Rye, a struggling writer who runs writing workshops at a local high school and is working on a novel titled The Night; Miguel Ardiles, a psychiatrist who loves to blur boundaries with his clients and dreams of being a writer; and Pedro Álamo, a writer obsessed with palindromes, anagrams, acrostics, and double-texts, cleverly translated by Hahn and Hernández González: “Alone, too, by myself, but noble, no regrets. You know the line, I suppose? But it can also be read as A loan to buy mice, elf, but no bell nor egrets.” A plethora of other real and fictitious characters, mostly writers, inhabit the text in various ways, including Darío Lancini, a Venezuelan poet who wrote a 750-word palindrome, and Swiss linguist Ferdinand de Saussure, whose early 20th-century investigations into anagrams are intriguingly juxtaposed with contemporary murder investigations in Caracas. What emerges is a wild and complex celebration of language and storytelling. While dense, the result is exhilarating and entertaining."
—Publishers Weekly